Meet Robyn and Nicholas Jones. They purchased Mudbrick in 1992 when Nicholas was 28 and Robyn was 27 years old.
They still own and operate the property today.

Once upon a time, Robyn and Nicholas, who were working in reasonably mundane employment in Auckland, decided to do something different. In 1992, they bought a lifestyle block on Waiheke Island – bare land with wonderful sea views, loaded with hope and promise. Their plan could be described today, as predictable:

They would set up a vineyard, live off the land, quaff the fruit of the vines, and live happily ever after. They had both trained as Accountants – Nick was working as an actual accountant, but Robyn was not. There was a time when she thought she might be one of those people that gain a degree but never use it. She didn’t like accounting, and couldn’t face the thought of working in this environment for the rest of her life. Nick could sympathise – he didn’t like the predictable future stretched out in front of him either.

They began by visiting the property at weekends, and planting, planting, planting was the never-ending story. Planting shelter belts, planting trees, planting vines. Most died, or were eaten by the neighbour’s cattle, which would periodically escape from their confinements and feast on all the hard work until they were caught – usually not until the following weekend. One of the first skills Robyn and Nicholas developed was how to recognise both a satisfied and guilty look crossing a cows face. Anger management also proved useful later on.

Robyn’s mother Ann already lived on Waiheke, and helped to contribute to the large number of eccentrics the Island was renowned for. She used to arrive on the property in her huge old Mercedes Benz, spread out the picnic blanket and open her boot – laden with pies, cakes and tarts she had been baking all week, she was a fantastic cook. Unfortunately, Ann suffered a fatal stroke while planting, planting, planting – digging a particularly difficult piece of clay, during the week, when Robyn and Nicholas were at work.

Some time later, a Barn/House/Winery (Kiwis seem to thrive on the notion that if you can use one building three ways, all the better) was completed, built out of mud bricks. Robyn loved the look and feel and Nicholas agreed only on the principle, that mud brick buildings do not vary their internal temperature by more than one degree in any 24-hour period – perfect conditions for aging and storing wine. Robyn sighed with relief – she just liked the look and feel. The first vintage was expected in 1996 – three years later. Time passed – Robyn had a baby girl, and subsequently a baby boy, and Nicholas continued to commute to his job in Auckland, while Robyn managed development.

After a bath in their Mudbrick “barn house” one night, Nicholas suggested to Robyn as they sat, sipping wine on the terrace overlooking the Hauraki Gulf, that they set up a “Cafe”, to produce food to complement their wines in one of the best environments on earth. Robyn stated that if she were to be involved with a “cafe” it would have to be a nice one. Nicholas as an Accountant could see that this statement had ramifications…

And so The Mudbrick Vineyard and Restaurant began.

We did not have winemaking or hospitality experience when we began this venture. We have grown our business with one major philosophy uppermost in our minds – we operate from a customer’s point of view – and we believe it works. We began the venture at a fairly young age, and with a project that was so long term in its maturity, we believe this has been a substantial advantage to us. We weren’t burnt out and approaching retirement age when we began, which has meant that we have been able to harness our resourcefulness and passion to see this through as a long-term project.

It has now been over 18 years since we opened the restaurant – 20 years since the first plantings. We have aged – and so has our environment! Our vines are mature, but we still plant new varieties. Our landscaping has matured, but we continue to extend our gardens and potagers every year. We work on our buildings, changing, adding touches here and there. We feel they stand the test of time. The vision of our project was one that would be a lifelong development spanning 30 years and, as we suspected, we have yet to tire of drinking fine wine and creating fine food. Even eating it has not yet become burdensome. We now have two vineyard sites on Waiheke, complete with fully operational winery, and now we have received gold medal recognition for our wines.

We hope when you visit, you will enjoy The Mudbrick as much as we do. We are proud of what we do, and we know you will feel transported into a different world. The Mudbrick has it’s own heartbeat – and has a lovely feel surrounding it when you visit. 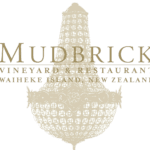 During the Covid-19 lockdown, we are able to deliver WINE nationwide and internationally with FREE delivery New Zealand wide!

If you have a specific query, or can’t see the wine you are looking for, please email us directly on cellar@mudbrick.co.nz

*free delivery applied at checkout for all valid NZ addresses